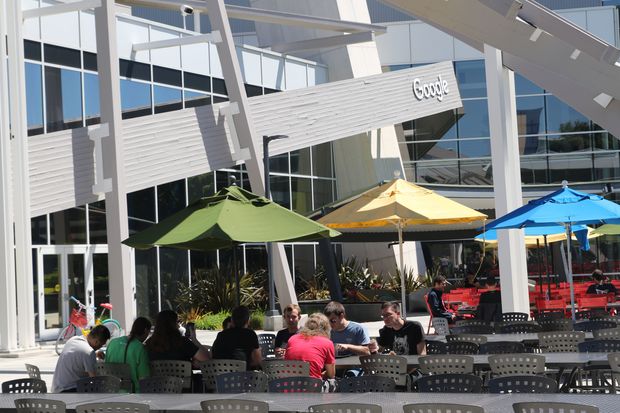 The Google campus in Mountain View, Calif., in May 2017. Months earlier, employees exchanged emails with ideas on how to harness the company’s vast influence on the internet in response to the Trump administration’s travel ban. PHOTO: CHRISTOPH DERNBACH/DPA/ZUMA PRESS
454 COMMENTS
By
John D. McKinnon and
Douglas MacMillan
Updated Sept. 20, 2018 8:24 p.m. ET

WASHINGTON—Days after the Trump administration instituted a controversial travel ban in January 2017, Google employees discussed ways they might be able to tweak the company’s search-related functions to show users how to contribute to pro-immigration organizations and contact lawmakers and government agencies, according to internal company emails.

The email chain, while sprinkled with cautionary notes about engaging in political activity, suggests employees considered ways to harness the company’s vast influence on the internet in response to the travel ban. Google said none of the ideas discussed were implemented.

"These emails were just a brainstorm of ideas, none of which were ever implemented,” a company spokeswoman said in a statement. “Google has never manipulated its search results or modified any of its products to promote a particular political ideology—not in the current campaign season, not during the 2016 election, and not in the aftermath of President Trump’s executive order on immigration. Our processes and policies would not have allowed for any manipulation of search results to promote political ideologies.”

In one of the emails a worker wrote: “I know this would require a full on sprint to make happen, but I think this is the sort of super timely and imperative information that we need as we know that this country and Google, would not exist without immigration.”

The disclosure is certain to fuel complaints by many Republicans that Google, a unit ofAlphabet Inc., stifles conservative viewpoints online and promotes a liberal worldview. Those longstanding concerns have received more attention recently from some GOP congressional leaders, as well as President Trump himself, in the run-up to the 2018 midterm elections.

Next week Attorney General Jeff Sessions is scheduled to meet with some state attorneys general to discuss concerns of anticonservative bias. Conservatives recently expressed anger after Breitbart News released a video of a 2016 company meeting in which Google senior managers lamented Mr. Trump’s election victory. Google said the comments from executives in the video expressed the personal beliefs of those executives, not the company’s.

Mr. Trump’s original travel ban, implemented to restrict immigration from countries deemed a security risk, temporarily barred visitors and immigrants from seven majority-Muslim countries, and placed new limits on the U.S. refugee program. It sparked huge protests and chaos at many U.S. airports. It was challenged in court and, after several revisions, was upheld by the U.S. Supreme Court.

Google co-founder Sergey Brin, who immigrated from the Soviet Union as a child, appeared at a rally protesting the travel ban outside San Francisco’s airport.

The email conversation on the issue included several cautionary comments. “This is a highly political issue, so we need to remain fair and balanced and present facts,” one executive wrote, in response to proposals to tweak search-related functions.

The Google emails were written on Sunday, Jan. 29, two days after Mr. Trump signed the first version of his travel order, which generally restricted immigration to the U.S. from several majority-Muslim countries.

One of the emails, from an employee of the Search Product Marketing division, explained that there was a “large brainstorm” going throughout the company’s marketing division over how to respond.

“Overall idea: Leverage search to highlight important organizations to donate to, current news, etc. to keep people abreast of how they can help as well as the resources available for immigrations [sic] or people traveling,” the email says.

The email included a compilation of specific ideas that individual company officials had already floated. Some apparently involved finding ways to “actively counter” Google searches that produced anti-Islamic and anti-Hispanic search results. Others centered on Highlights, the code name for an experimental project Google has tested that allows influential people, like politicians and musicians, to post text updates that appear directly in search results.

“Can we launch an ephemeral experience that includes Highlights, up-to-date info from the US State Dept, DHS, links to donate to ACLU, etc?” the email added.

But a public-affairs executive wrote: “Very much in favor of Google stepping up, but just have a few questions on this,” including “how partisan we want to be on this.”

“To the extent of my knowledge, we’d be breaching precedent if we only gave Highlights access to organizations that support a certain view of the world in a time of political conflict,” the public-affairs executive said. “Is that accurate? If so, would we be willing to open access to highlights to [organizations] that…actually support the ban?”

Write to John D. McKinnon at john.mckinnon@wsj.com and Douglas MacMillan at douglas.macmillan@wsj.com