How RUSSIA BRIBED the US Government into selling Uranium. RUSSIA COLLUSION! 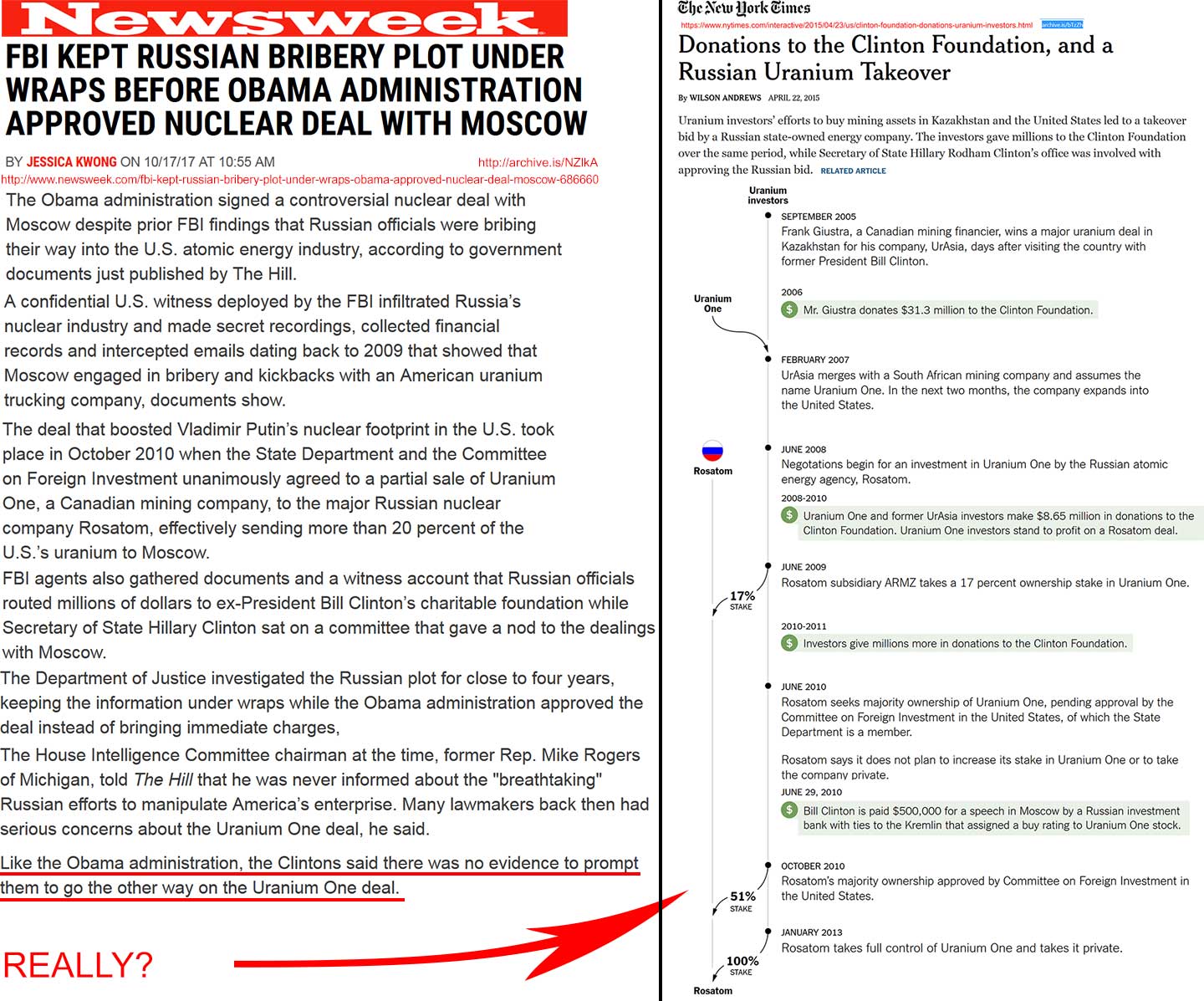 Hilary got millions of $$ via her “Charity” for a bad deal on Uranium while the FBI turned a blind eye on bribery.

FBI KEPT RUSSIAN BRIBERY PLOT UNDER WRAPS BEFORE OBAMA ADMINISTRATION APPROVED NUCLEAR DEAL WITH MOSCOW
he Obama administration signed a controversial nuclear deal with Moscow despite prior FBI findings that Russian officials were bribing their way into the U.S. atomic energy industry, according to government documents just published by The Hill.

A confidential U.S. witness deployed by the FBI infiltrated Russia’s nuclear industry and made secret recordings, collected financial records and intercepted emails dating back to 2009 that showed that Moscow engaged in bribery and kickbacks with an American uranium trucking company, documents show.

But the Obama administration insisted no evidence existed of Russian interference and that there were no national security concerns for committee members to go against the deal in 2010.

The deal that boosted Vladimir Putin’s nuclear footprint in the U.S. took place in October 2010 when the State Department and the Committee on Foreign Investment unanimously agreed to a partial sale of Uranium One, a Canadian mining company, to the major Russian nuclear company Rosatom, effectively sending more than 20 percent of the U.S.’s uranium to Moscow.

In 2011, the Obama administration gave the green light for Rosatom’s Tenex subsidiary to sell uranium to American nuclear power plants. Before the deal, Tenex could only sell reprocessed uranium from dismantled Soviet nuclear firearms to power plants in the U.S.

Russian exortion threats and kickbacks brought legitimate national security concerns, “And none of that evidence got aired before the Obama administration made those decisions,” a souce who insisted on anonymity out of fear of retribution told The Hill.

FBI agents also gathered documents and a witness account that Russian officials routed millions of dollars to ex-President Bill Clinton’s charitable foundation while Secretary of State Hillary Clinton sat on a committee that gave a nod to the dealings with Moscow.

Like the Obama administration, the Clintons said there was no evidence to prompt them to go the other way on the Uranium One deal.

The Department of Justice investigated the Russian plot for close to four years, keeping the information under wraps while the Obama administration approved the deal instead of bringing immediate charges.