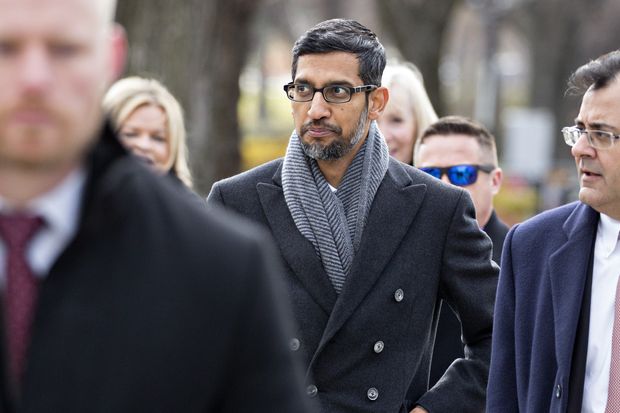 Sundar Pichai is a hero among many engineers in Silicon Valley, where he helped build some of Google’s most popular products and climbed the ladder to the top of the internet giant.

In Washington, he’s a relative nobody.

Mr. Pichai will be thrust into the political spotlight when he testifies at his first Congressional hearing on Tuesday. Members of the U.S. House Judiciary Committee are expected to grill the executive on a range of topics, including Google’s handling of user data and its development of a search engine that would comply with China’s strict internet censors. He agreed to GOP requests to appear before the committee prior to the 2018 election.

For Mr. Pichai, a former semiconductor engineer who has shied away from public appearances for most of his three years as CEO of Google, a unit of Alphabet Inc., GOOGL +0.07% the Washington visit will test his ability to take on a new role as the public face of a company increasingly confronting harsh regulatory scrutiny.

“It remains to be seen whether he can step up and be the kind of diplomat and statesman Google requires him to be,” said Arun Sundararajan, a business professor at New York University. “He has, for most of his career, been a product guy.”

Google faces the prospect of regulations that could make it costlier to operate an online ad business expected to generate more than $100 billion this year. Lawmakers have held hearings in recent months discussing the need for stronger federal protections governing the collection of online data and state attorneys general have begun coordinating a legal strategy to confront tech firms on alleged antitrust violations and over what some Republicans say is a suppression of conservative speech.

Mr. Pichai, 46, joined Google in 2004 and ascended the company’s ranks, spearheading the successful Chrome web browser and overseeing the expansion of the Android operating system. When the company reorganized Google as a division of Alphabet in 2015, Mr. Pichai was named CEO of the key strategic business that includes search, YouTube and online ads.

The executive’s relative inexperience in Washington contrasts with his predecessor Eric Schmidt, who, during a 10-year stint as Google’s CEO from 2001 to 2011, cultivated powerful political allies such as former President Barack Obama and held sway with both parties in Congress. During the Obama years, Google defeated an antitrust probe by U.S. regulators and secured favorable policies on net neutrality, online liability and copyright issues.

Mr. Pichai “came to this country as an immigrant with no resources and rose to lead one of the most powerful and influential companies,” said Rep. Ro Khanna, a Democrat whose district in California includes Google’s headquarters of Mountain View.

“Of course he’s not going to have a network in Washington,” he added. “He hasn’t played the political game. I think that’s refreshing.”

Mr. Pichai has been working to build stronger alliances with GOP lawmakers and conservative-leaning groups, according to internal company discussions. In a companywide conference call with employees earlier this year, a top Google public policy executive said that Mr. Pichai has pushed the Washington office to make more friends on the right and occasionally pitched in on the effort, like when he traveled to Tennessee in February to attend a groundbreaking of a new data center with GOP Sen. Bob Corker.

Since the GOP’s electoral sweep in 2016, “one of the directives we’ve gotten very clearly from Sundar in his leadership is to build deeper relationships with conservatives,” said the executive, Adam Kovacevich, according to a recording reviewed by The Wall Street Journal. That’s because of the perception in Washington that Google and its employees lean to the left.

Google angered lawmakers on both sides of the aisle in September, when the company failed to send top leaders to appear at a Senate hearing which featured Facebook Inc.’s operating chief and Twitter Inc.’s CEO. Google’s absence was noted by an empty chair with a placard bearing the company’s name.

At the hearing Tuesday, lawmakers will attempt to pin down Google’s CEO on several issues where they say the company hasn’t been transparent with the public.

Mr. McCarthy has said Google needs to explain why it failed to disclose a privacy flaw in its Google+ social network which exposed the personal data of hundreds of thousands of users. The company discovered the problem in March but didn’t discuss it publicly until after The Wall Street Journal reported it in October.

Mr. Pichai will also likely be asked to clearly explain the company’s plans for China. The executive has at times defended the company’s possible return to the country and at others questioned whether a search engine is the right product for the company to launch there.

House GOP members may also return to their concerns around Google’s alleged political bias. Leaked emails recently showed that some of the company’s employees discussed altering Google’s search function to undermine conservative ideas and policies, including President Trump’s controversial travel ban. Google has said that none of the proposals to alter the search function was ever implemented.

Democrats are generally skeptical of claims that tech companies are biased against conservatives. Their questions are likely to focus more on privacy, competition and other issues.

Write to Douglas MacMillan at douglas.macmillan@wsj.com and John D. McKinnon at john.mckinnon@wsj.com